I am introducing a new portion of my blog entitled 12 Lighthearted Questions.

The idea being that I send out 12 informal questions to a variety of woodworkers on the blogs and publish their responses, unedited.  Hopefully it will provide a unique perspective into some of our favorite woodworkers and to serve as a way for them to share a little more insightful information about themselves, with us, the woodworking community.

Why 12? Well, there are 12 inches in a foot, 12 eggs in a carton, 12 steps in the program, and 12 seemed to be the right number of questions that a woodworker might actually take the time to respond to!

I recently went back and read all of her amazing blog posts from 2007 on and I’ve chose Kari Hultman, of The Village Carpenter, as our first candidate. She was graceful enough to accept:

1- Was there a woodworker in your family growing up?     Nope. My Dad is a retired nuclear projects engineer. I learned at a very young age not to ask him what he did for a living, because he’d tell me. In engineer’s details.

2- Who is your biggest woodworking influence?       Probably Chris Schwarz. I discovered his blog soon after I started mine, and his enthusiasm for and research into traditional woodworking helped steer me in the right direction.

3- What book would you buy as a gift for a novice woodworker?         If he/she were interested in working with hand tools, I would suggest Country Furniture by Aldren Watson. I haven’t read many power tool books, but the book that got me started in woodworking was The Complete Manual of Woodworking by Albert Jackson and David Day.

4- Does being a graphic artist influence your woodworking?      Definitely. Principles in design are found in all the arts and crafts: balance, composition, negative space, pattern, hierarchy, contrast…

6- You seem to use a lot of pine, which most woodworkers won’t touch.  What’s your favorite wood to work with?     I do love pine, especially the smell. My favorite wood is Pennsylvania cherry. Its workability, warmth, and depth are superb.  When it’s finished, it glows.  Plus, I can get it for a buck fifty a board foot. I’m never moving from this area.

7- I am a big fan of the drawer hanging jig you blogged about.  What is your favorite Jig?     It’s a jig that holds thin and small boards based on a design I found in an old woodworking book. I wrote a post about it: http://villagecarpenter.blogspot.com/2007/12/my-favorite-jig.html     (I did read all of Kari’s blog posts, honest I did!)

8- Do you compost your sawdust?      I use it to line the walkways between my raised flower beds, and my dog (Daisy) uses it as a cloak of invisibility.

9- What is the 1st thing you do when walk into the shop?     This is silly, but I’ll often walk through my shop with my arms outstretched, looking from side to side, ala Vanna White. It’s sort of the way I “hug” my shop. Crud. Did I just write that out loud?

10- What is the most complicated joint you have ever attempted?      It’s not a complicated joint, but it was challenging for me—the through dovetail and tenons on my new workbench. The fit had to be such that the joints would hold the top tightly but could be pulled apart for transport. And look pretty.

11- What would woodworkers in the blogosphere be most surprised to learn about you?     I once stood in line for two and half hours to get Norm Abram’s autograph.

12-  What project is on your bucket list?      There are a number of antique tools that I plan to reproduce. Some involve engraving and inlay, neither of which I’ve ever tried, so I’m very excited.

Apparently this is Kari's secret to keeping her nails looking so nice!

Thank you, Thank you, Thank You to Kari for being such a great sport and sharing her “innermost” secrets!  And Thank You for all the years of amazing blog posts!  I can’t imagine anyone reading this does not read Kari’s Blog, but please head over there and show her some love!

Let me know what you think and hit me me up with comments and suggestions.  I’d love to hear from you.

Back in September I attended the Berkshire WoodWorkers guild show in Stockbridge, MA. It’s an opportunity for members to display and sell their work.   The craftsman are varied in age, gender, and design sensibility. It’s a small show and I’m always surprised that there aren’t more active members, given the creative nature of the Berkshires.

Each year there is a silent auction of smaller projects from members. This year there was a “handcut dovetail class” on the auction block. Starting bid was $90. I’m in! I signed my name and was the 1st to bid, we then went and wandered the show. As I stated, designs and skill levels are varied, and you know how it is, you wander a show and there are certain pieces and artisans that you respond to more than others. Towards the end I came upon the booth of John Corcoran. His work was traditional, well done and obviously created with a skilled hand.  As I admired his work, we sparked up a lively conversation. He spoke of his work and where he has taken classes. It was then that it occurred to me the John was the one offering the dovetail class. Perfect I thought!

Well as luck would have it, I got a call later that week that I had indeed won the auction. Score! The sad thing is, no one else apparently bid. I must say I was surprised. Like many of you, I want to see more folks participating in the hobby we find so enjoyable. Ah well, their loss, my gain.

I was very excited. I’ve taken a number of woodworking classes, but handcut dovetails were never really covered in great depth. I can machine cut dovetails and I’ve even handcut single dovetails for joinery, but not for a traditional use such as a drawer.  In fact, last year I built a shaker table as part of the Woodworkers Fighting Cancer build with The Woodwhisper Guild. Sadly the table has sat in my shop awaiting a drawer. It just seemed to me to be one of those projects that calls for handcut dovetails. I didn’t want to use a router jig  for a 3″ drawer, and I didn’t want to cop out and use a rabbit joint on this very traditional table (I am a member of the Hancock Shaker Village after all!). So the table sits, collecting dust until my skills (& confidence) are up to it.

So after lots of phone calls back and forth, John and I set up a Saturday morning for my private lesson.

John, a former engineer, has spent his retirement pursuing his woodworking dream, building a shop and honing his craft by taking extensive classes. An avid fan of Krevnov’s work, he spent three weeks out at the College of the Red Woods Fine Woodworking Program sharpening his skills, as well as several classes at the Center for Furniture in Maine.

We headed out to the shop, where John had laid out an impressive display of tools for us.  He was very organized, including a step by step printed hand out.  This wasn’t going to just be a couple of hours hanging in the shop!  This was a one on one tutorial.  We briefly went through the various tools and he got straight to it.  He showed me how he does the layout and then he let me lay it out, he showed me how he cuts this pins and then I cut my pins, and so forth.  This was great.  I thought, this is how woodworking classes should be, a couple of hours zeroing in on just one skill, in a casual shop atmosphere and no distractions for other students at different levels.

We covered both through and blind dovetails.  John is a “pins first” kinda guy, which makes sense to me.  So we’ll see, perhaps that makes me a “pins first” guy as well!  His technique is quite similar to Kari Hultman’s video shown here.  John also uses a block, clamped down at the shoulder, giving the chisel a surface to reference off of (very smart!). Unlike Kari and others, John does not use a fret saw, which I was happy about.  I have not really tried the fret saw, but I like using the chisel to remove all the waste.  John also introduced me to a simple method of twisting the chisel to remove larger pieces of waste. It’s those small techniques that make classes so valuable.

Well, time flew and before we knew it we had worked though lunch. John’s wife was kind enough to prepare some sandwiches and we sat inside and chatted for at least an hour!  It’s true what they say about woodworkers, we are a kind bunch (and so are their wives!).

Although it was only October, we were hit that day with a freak snow storm.   As we sat in their house the snow continued to come down, I looked out and decided I better get on the road. I could have stayed all day, but I would have to finish up my blind dovetail at home. 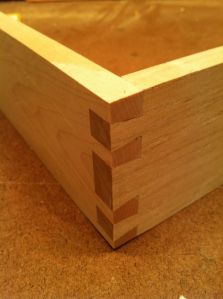 As you can see my dovetails came out pretty good…

What's wrong with this picture??

…except for cutting my blind tails as both pins!  I guess I need to hire full time to look over my shoulder!

Please take a moment to check out John’s work here.

He is a true gentleman, a talented woodworker and a new friend.

Where I often find Inspiration: